That’s right! It’s time for the Itchy and Scratchy Show! Yes, Renee has survived yet another day. Although she must admit, this third day out has been the worst day so far. It’s not so much a pain thing. She’s frustrated with the itch… with the difficulty sleeping… with being tired… and maybe with the husband who drew on her face on the internet. Although she has to admit – it was kinda funny.
But kudos to her, Renee has figured out how to master the problems, and she’s willing to impart her wisdom to you. Because she has a nasty reaction to Benadryl, Renee has used Allegra with great results. She’s one of “those people” who don’t like taking medicine, and has stayed away from Ibuprofen, but Tylenol PM right before bedtime has done wonders. And because she has to move when she sleeps, she’s used a towel over her pillow at night just in case, which has allowed her to de-stress. We’d hate to sully the nice floral pillows! 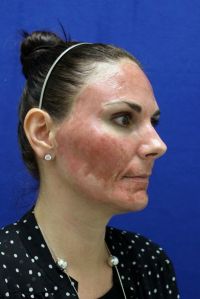 So here she is today – the Renee-ometer stands at about a 7.5. She’s been a true camper, and she believes me when I tell her it’ll only get better from here on out.